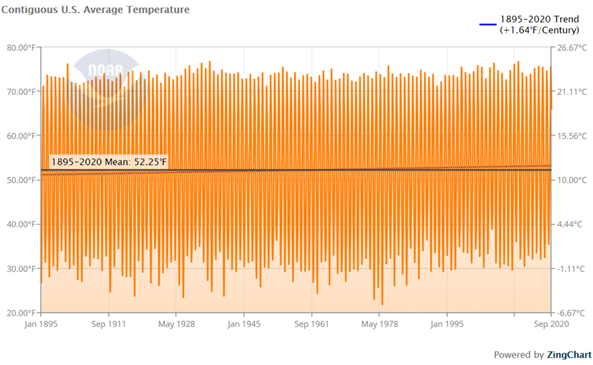 Temperatures in the United States have remained stable with a small warming trend.

We’ve warmed 1.64° F over the last century. Mainly because winters across the nation are a few degrees less cold and summers are stable.

This is a average monthly temperature for the United States (excludes Alaska and Hawaii), from National Oceanic and Atmospheric Administration (NOAA).

Look at the top. These are warmest months. Is there an alarming trend? What trend do you notice?

What we have noticed in making these graphs for locations across the U.S. is that our winters are a little less cold and summers are about the same in most places. The west has warmed more, the south and south east hardly at all. Midwest largely average.

How About A Pilot Project To Demonstrate The Feasibility Of Fully Wind/Solar/Battery Electricity Generation?

“Ice Man” from 5,000 Years ago Found Under Glacier

ABOUT US
We provide facts about energy, how it works, where it comes from, how much we use, what it does for us, the environment and climate.
Contact us: info@truthinenergyandclimate.com
FOLLOW US
© Copyright 2021 |Truth in Energy & Climate | All rights reserved.